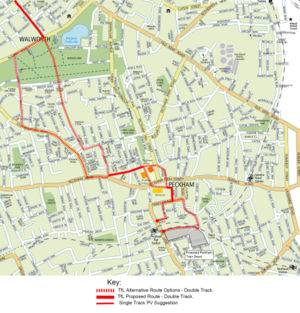 Cross-River Tram TfL route options across Burgess Park and into Peckham, and across Peckham to Peckham Rye station.

The Council are in the midst of developing their planning policies for Peckham town centre. They have completed the Unitary Development Plan (UDP) for the borough's land use, and this includes a statement about certain commercial areas, including Peckham town centre. The next stage is the development of the PAAP (the Peckham Area Action Plan). The Council originally said that this would begin in February 2007, and then several dates subsequently. But it has now finally begun in March 2008 by the release of Future Peckham - a ‘vision paper’ and the PAAP Consultation Strategy - for public comment between 14 March 2008 and 25 April 2008. This will be followed in May by an ‘Issues and Options’ paper for consultation between May and July. The Council asks:

The effects of the originally proposed single-site tram depot on Peckham town centre would be devastating. Hundreds of jobs, dozens of businesses, scores of artists, several churches, and dozens of new homes would all have to be demolished, and there would be 10 or more years of blight.

Until now the only information which TfL has released publicly about the depot plans has been in response to Freedom of Information requests during the UDP public inquiry last year. Through this we discovered the huge extent of the plans to demolish everything between the railway lines and down Rye Lane to Bournemouth Road and along to Consort Road near the railway bridge. This was known as the single-site plan, which has now been superseded by the split-site plan. More... 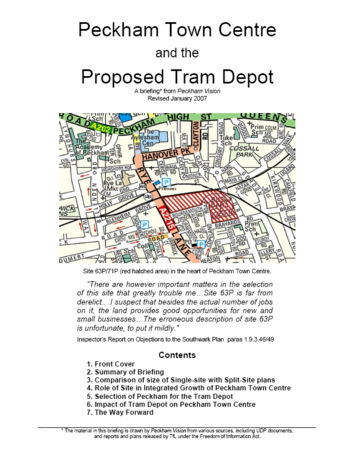 Peckham Vision produced a briefing pack designed to outline the issues raised by the proposal to locate the Cross River Tram Depot on Site 63P/71P in the heart of Peckham Town Centre, and to indicate the way forward. Whereas the tram promises significant regeneration benefits for Peckham as a whole, this is not the case for the tram depot. More jobs and businesses would be lost than created by the depot. 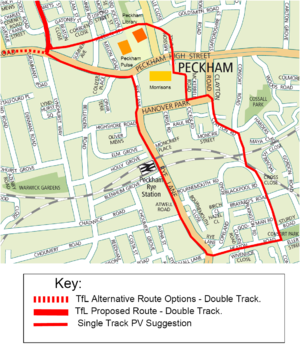 One way tram loop in Peckham

TfL's recent report on their consultation last year on possible tram routes has confirmed that there could be great difficulties in accommodating the tram on the roads and through the town square in the crowded Peckham town centre. To deal with these problems Peckham Vision has suggested a one way tram loop right around the town centre, southbound on Consort Road to Heaton Road, and northbound along Rye Lane. A single track would be much less disruptive than a double track. The single track could take the tram one way from Kelly Avenue through the town centre behind the Library and south along Clayton Rd and Consort Rd to Heaton Road, and back along Rye Lane stopping right outside Peckham Rye station, and then out of the town centre via the High Street and rejoining the double track tram near Kelly Avenue. More... 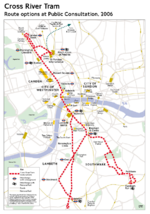 The Cross-River Tram is a project to link Camden, Brixton and Peckham by tram. The project was organised by TfL (Transport for London), for the Cross River Partnership and the previous London Mayor. The current Mayor has removed the project from TfL's long term planning. It was intended to run from Camden Town, Euston and Kings Cross in the north, down to Aldwych. It would then go across Waterloo Bridge to Waterloo Station where the line divides. One branch would go down towards Brixton (possibly via the Elephant), and the other branch towards Peckham. The route between the Elephant and Peckham was not decided, but both the main options avoided Walworth Road and Camberwell. One suggestion followed the route of the 343 bus - down Heygate St, Thurlow St, across Burgess Park and the Wells way and Southampton Way to Peckham. The second option was slightly more direct and crosses Burgess Park to meet Chandler way before arriving in Peckham. More...

The tram depot is planned for the heart of Peckham town centre. Originally this was going to be all in Peckham, but the Planning Inspector rejected this because of its adverse effects on the town centre. This plan is known as the 'single-site' plan (see here). The Inspector recommended instead a 'split-site' depot, that is part of the depot in Peckham and part somewhere else. The implication was that this would be smaller so that it would have less adverse effects on Peckham town centre. It is in fact less than half an acre smaller, and is more intrusive into the town centre. It would stable less trams – about 35 compared with the original 48 but it appears that the repair and maintenance workshops for the whole or major part of the fleet of trams would be on this Peckham site. The depot on this plan would still sterilise and close off for good this huge site which has a strategic role in realising the potential of the town centre. More...

The proposed Cross-River Tram, scheduled for operation from 2016 at the earliest, is a main feature of the Council's plans for Peckham town centre. This is promised to improve public transport to and from Peckham, help to create employment prospects for Peckham people both locally and elsewhere in London, and help to stimulate trade and businesses in Peckham. The Council also wants the tram depot located on a major strategic site (Site 63P/71P) in the heart of the town centre, on the seven acre site stretching from Rye Lane to Consort Road and Brayard's Road, see right for map. The Council has claimed that this also would regenerate the town centre by creating jobs, but the UDP Planning Inspector said that this was based on 'misinformation' that the site was derelict, and he said that the tram depot would remove many more jobs than it created (click here for Inspector's report).

Peckham Vision and others have pointed out that the plan is already causing blight and degeneration which could continue for the 10 years or more before it was completed. In addition the tram depot, which would be a high security site for 24 hours a day would if built: