The tram depot is planned for the heart of Peckham town centre. Originally this was going to be all in Peckham, but the Planning Inspector rejected this because of its adverse effects on the town centre. This plan is known as the 'single-site' plan (see below). The Inspector recommended instead a 'split-site' depot, that is part of the depot in Peckham and part somewhere else. The implication was that this would be smaller so that it would have less adverse effects on Peckham town centre. It is in fact less than half an acre smaller, and is more intrusive into the town centre. It would stable less trams – about 35 compared with the original 48 but it appears that the repair and maintenance workshops for the whole or major part of the fleet of trams would be on this Peckham site. The depot on this plan wouid still sterilise and close off for good this huge site which has a strategic role in realising the potential of the town centre. 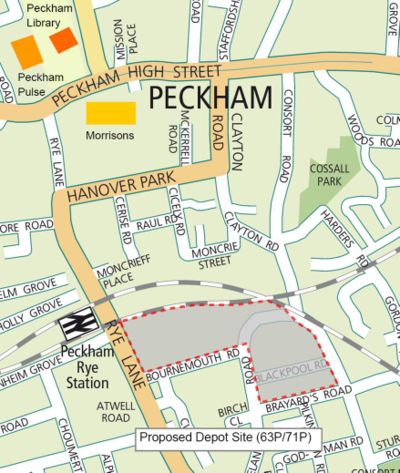 Plan of the area known as Site 63P/71P (in grey). This is the site in Peckham Town Centre designated for the Cross-River Tram depot. It was referred to as 63P during the UDP process, and renamed 71P when the UDP was finalised. 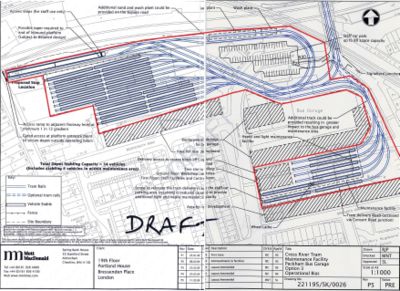 Version 1 of the new split-site plan. 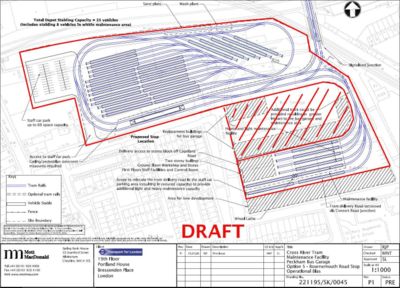 Version 2 of the new split-site plan.

These are two versions of the 'split-site' plans released in August 2006 by TfL to Peckham Business Park as a result of the Freedom of Information request. They show that the depot would now stretch south almost to Brayards Road. The depot would intrude much further into the residential area and would be surrounded on all sides by housing. The new housing on the Rye Lane end of the site would be right up against the depot. The route would still bring the trams into the depot site under the Consort Road railway bridge at a very sharp turn. The junction would have traffic lights and would have to be shared with the main north -south road traffic. The land between the railway lines would not be taken. On version 1 of the plan, the tram would go through the depot and terminate at Rye Lane, on version 2, it would run alongside Bournemouth Rd and terminate there. The latter would ensure all passengers left the tram before it entered the depot which is preferable for such a high security site. On both plans there would be a strip of new buildings between the depot and Brayards Rd, and on the first plan, there would be strip development between the depot and Bournemouth Rd.

Comparison of Single-site and Split-site

The maps show the outlines (the ‘footprint’) of each of the three plans. The tram depot plan is shaded red; the bus garage depot is hatched red. They show how the new ‘split-site’ plans, that are alleged to be smaller, do not in any way follow the spirit of the Inspector’s decision to reject the orignal ‘single-site’ plan. 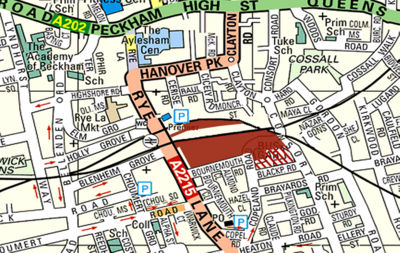 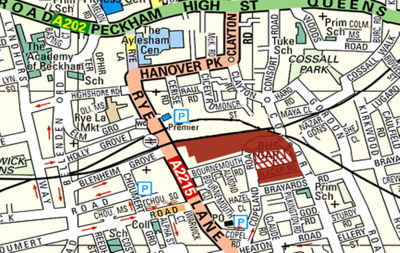 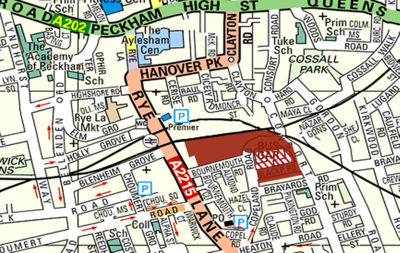 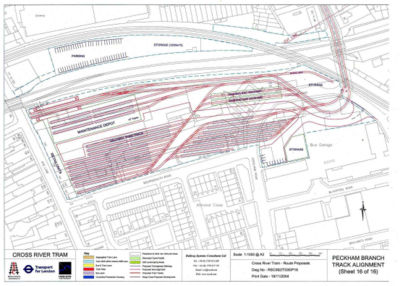 The original single-site depot plan meant that the whole depot would be have to be on one single site - in this case Peckham town centre. It would have had stabling for all 48 trams, which would have come back to Peckham every night to be parked and maintained. So all the cleaning and engineering workshops would also be on the site. This plan was rejected by the UDP Planning Inspector because of its very bad effects on Peckham town centre.