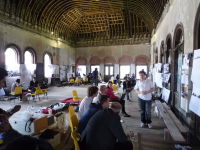 from Southwark News by Kevin Quinn
A waiting room left hidden on platform three of Rye Lane Station could be the key to unlocking future investment in Peckham. Like something out of J.K. Rowling’s Harry Potter, this enormous space opened as a waiting room in 1865 and was turned into a billiards hall in 1890 until it closed in 1960. Forgotten, over the years this space was left to fall into disrepair. It has only recently been opened to the public (albeit briefly), but for those wanting to attract future investment into Peckham town centre the space represents a way forward. For over a decade the planners and officers at the council’s regeneration department have toyed with a multitude of ideas on how to improve Peckham as commercial hub.
In 2001 radical proposals to transform Peckham into ‘the Notting Hill’ of south London were being considered by Southwark Council’s Peckham Partnership. The head of this regeneration body, Russell Profitt, was looking at recommendations which would mean knocking down huge parts of the high street, pedestrianising large parts of Rye Lane, demolishing the dank and dark buildings around Peckham Rye train station and expanding the Aylesham shopping centre.
Years before in the 1990s, Peckham had undergone a huge regeneration programme, when £64 million (and £150 million in other funding) was given to the area, predominantly to transform housing in the north. As well as removing the notorious estates, some of the legacy from that money was the new Peckham Square and the iconic library within its boundaries.
Last year the council officers were back on the hunt for a way forward, producing a document entitled ‘Future Peckham’ in a bid to garner people’s opinions on what they wanted to see. This hefty 54 page document again suggested a myriad of radical changes in the area, including relocation of the cinema, the creation of three fifteen storey buildings for new homes and once more the redevelopment of the Aylesham centre and Rye Lane to produce a vibrant shopping environment.
But since the initial proposals from Russell Profitt for a ‘Notting Hill’ of the south much has changed on the ground in Peckham. Mr Profitt left the renamed Peckham Programme in 2008 and the subsequent abolition of a town centre management has left a vacuum in the council’s daily coordination on the ground.
In its place is a grassroots group, ‘Peckham Vision’, made up of local stakeholders including residents, community groups and business owners. It is becoming the driving force behind change and importantly they understand that in light of the present economic climate Peckham’s future relies on private investment. Read more…