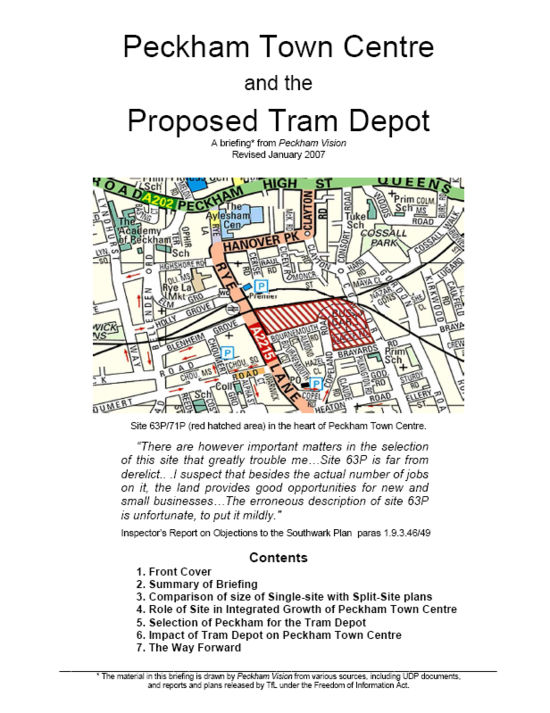 A briefing<ref>The material in this briefing is drawn by Peckham Vision from various sources, including UDP documents, and reports and plans released by TfL under the Freedom of Information Act.</ref> from 'Peckham Vision<ref>Peckham Vision is a community consortium of local residents, artists and businesses that has come together, with the Peckham Society, to seek information about the development plans for Peckham Town Centre, including the tram & depot, raise public awareness of these issues and stimulate an informed discussion about the future of Peckham.

This briefing pack is designed to outline the issues raised by the proposal to locate the Cross River Tram Depot on Site 63P/71P in the heart of Peckham Town Centre, and to indicate the way forward. Whereas the tram promises significant regeneration benefits for Peckham as a whole, this is not the case for the tram depot. More jobs and businesses would be lost than created by the depot.

Strategic importance of Site 63P/71P in integrated development of the town centre.

Site 63P/71P is the major development proposal affecting Peckham in the UDP, and page 4 in this briefing outlines its importance in the integrated growth of Peckham Town Centre. It covers nearly 7 acres of the town centre (about 4 football pitches). It is at the heart of significant economic, social and community activities.'

Flawed assessment and ‘defective’ decision to locate depot in Peckham

The decision to designate site 63P/71P for the tram depot (and the bus depot) was based on a flawed assessment of the existing uses and activities on the site. Page 5 gives some of the details of this.

‘Split-Site” Plans not smaller in effect

The new plans for a ‘split-site’ depot have not resolved this as the land required is similar in scale to the original ‘single-site’ plans. This is illustrated by the maps on page 3 comparing the footprint of the different plans. The UDP provides no constraints on the size of the depot, thus allowing the TfL plans still to close off this very large area of Peckham from town centre use.

The current uses on the site, all of which are now threatened with blight, dislocation and possible destruction, are very varied – hundreds of jobs, many small businesses, a large artists’ community, 9 Black & Minority Ethnic faith community groups . Both on the site and adjoining it are hundreds of homes all of which will suffer disturbance from the operation of a tram depot. Page 6 outlines these aspects in more detail.

Right location for the tram depot

Peckham is at the end of the line for the proposed Tram. There are strong technical, operational and cost reasons for the end of the line not being the ideal location for the depot. For the sake of the Tram project, it is critical to select the right places for the depots for the Cross River Tram. A comprehensive transparent review of all depot site options along the entire proposed tram route is therefore essential. 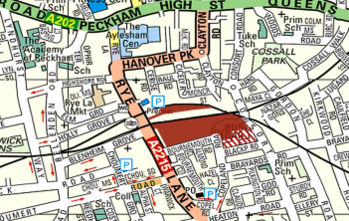 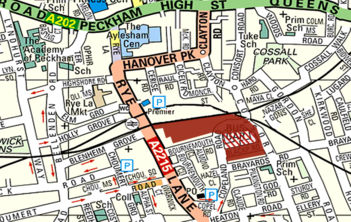 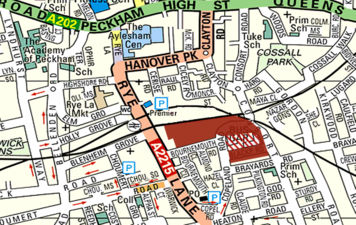 Peckham is an expanding and flourishing south London community, and ‘site 63P/71P’ is an active and interesting contributor to the economic, social and cultural life of Peckham. This positive change has been evolving naturally over the last decade. It is made possible because the site is characterised by a mixture of commercial and industrial buildings.

Selection of the Peckham site for the tram depot

Background to Choice of Site

In 2003/4, there were 2 studies of over 25 potential sites commissioned by TfL. Site 63P (now called Site 71P) was rejected in the first study, but was one of 5 sites on the second short-list. '

Inspector on the Choice of Peckham (Site 63P)

So, the Inspector rejected the original plan to locate the very big whole 'single-site' depot on Site 63P. He said there should be a smaller depot in Peckham, with another part elsewhere, called a 'split-site'. He recognised that a ‘split-site’ solution

TfL’s new plans provide stabling (parking) for 35 trams instead of 48, plus the same light and heavy engineering maintenance facilities.

The choice of Peckham followed a flawed selection process in which the proposed site was wrongly described as 'derelict' and not compared accurately with others. New-split site plans have not addressed this, nor the impact of closing off a very large strategic area from town centre use. To redress this:

The earliest the tram would be in operation would be 2016. Yet Site 63P/71P, a large part of the Town Centre, will be blighted and will deteriorate throughout that time. This central area already has vibrant small businesses, creative arts and places of worship. The depot plan would destroy these and close off the heart of Peckham to town centre activities. The effects of this have never been examined. There are sound reasons why there is an urgent need to examine the impact of the tram depot on Peckham and compare this with other site options before settling for site 63P/71P as the preferred location. The impact includes:

Loss of hundreds of jobs

The Government Planning Inspector rejected the original depot plan because of its local impact and loss of jobs. He recommended instead a ‘split-site’ depot with a part in Peckham and a part somewhere else. But the new plans do not make any significant difference and still have very disruptive and damaging effects.

There are currently 40 or more local businesses, most of them run by Black and Ethnic Minority traders. Many of these businesses have built a customer base that relocation will seriously disrupt. Despite any compensation, there is no guarantee that these businesses will be relocated to premises that they can afford. Moreover it is likely to take several years for these businesses to rebuild their customer base in a new location

The most recent TfL report (Tram Berthing and Maintenance Facility Phase 2 Report, September 2006) wrongly states that there is 1 place of worship on site 63P/71P. Over 9 Black and Minority Ethnic community faith groups have places of worship on the site. Many of these faith groups provide social support for some of the most disadvantaged members of our community who often have difficulties accessing mainstream services. The tram depot development will disrupt this local social support network.

Far from the site being ‘derelict’ it is home to over 60 local artists' studios. This vibrant artists community have working space on the site and have held a number of unique local exhibitions over the past two years.

Other examples of tram depots in the UK provide extensive sterile areas containing nothing more than sidings; engineering works, washing sheds, floodlighting and security fencing. Such depots are traditionally kept away from residential developments. Despite arguments that the impact of light and noise pollution will be mitigated, these remain matters of serious concern, considering the closeness of the proposed depot to residential properties on Atwell Estate, Copeland Road, Consort Road.

Current plans for the tram depot mean that trams would have to share the road with other traffic at Consort Road railway bridge. This is likely to result in traffic congestion there and dispersal of traffic across Peckham. In addition, Blackpool Road and part of Copeland Road will be closed off, diverting traffic to the doorstep of the primary school. This will be further compounded by plans to relocate both the reconfigured Bus Depot entrance and the delivery access to the tram depot stores on an already congested Copeland Road and Brayards Road.

We suggest that there are two key questions which need to be answered:

The following proposals suggest some ways in which these questions can be explored.

Proposal to the Councillors

1. Location of the Tram Depot

And recommends that there should be a:

Such a review is needed before the tram depot location consultation, and would provide the information necessary to have an informed public discussion.

We ask that the Council uses its position on the Cross River Partnership to press TfL to;

We ask that Councillors: