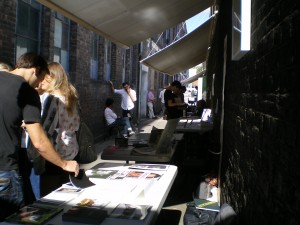 Letter of the Week in Southwark News on 9th October was from Peckham Vision reporting on the popular and successful Open House weekend walks led by The Peckham Society on Saturday & Sunday 20th & 21st September 2008.The main feature was the emerging Copeland Cultural Quarter, where the centre piece is the historic Bussey building. Some of the visitors had come because of their old family links with the Bussey building. One lady, from Swanley in Kent, said that her father often talked to her when she was a child of his time working in the Bussey building just before he went off as a very young soldier to the first World War. She came to see this place so connected with her memories of her father. Another lady, a current resident of Peckham, told how she had many memories of visits to the Bussey building, as a little girl, with her mother who was a seamstress in one of the businesses there. The Letter asked readers to contact Peckham Vision if they had any personal stories about the Bussey building, or Holdron’s department store that was right next to it on that site, so that they could be added to the local history archives of Peckham town centre. Read more …

A letter from Peckham Vision was printed in the 13th September edition of Southwark News. 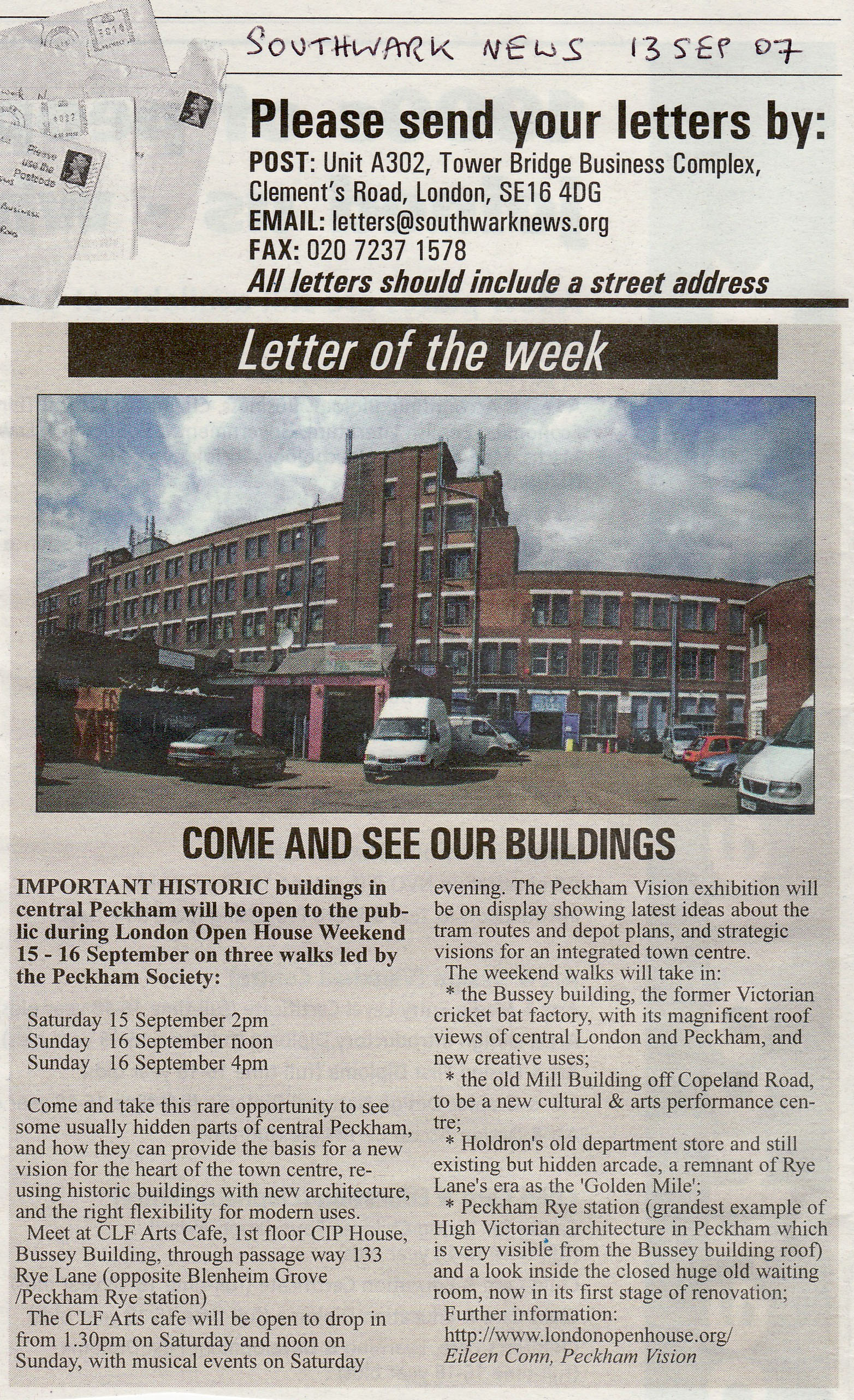 ï¿½I was intrigued by your article “Put tram line and says Shawcross” (Southwark News, 25th January). Whilst reserving my comments on the pros and cons of a tram tunnel under the park, it is great to see that Val Shawcross is asking for serious alternative considerations of the tram
depot locations. In Peckham Vision our campaign has been rightly pressing for a review of all possible tram depot locations. In order to correct the flawed way in which the proposed depot site right in the heart of Peckham town centre was chosen, the review must include an accurate and transparent comparison in public, of the merits and ‘dismerits’ of each site. So, I urge Val Shawcross and all those who want to see good decision making on the tram, to press for transparent feasibility study, including Environmental Impact Assessment, not only of Burgess Park but all other possible tram depot locations along and around the whole of the proposed tram route. 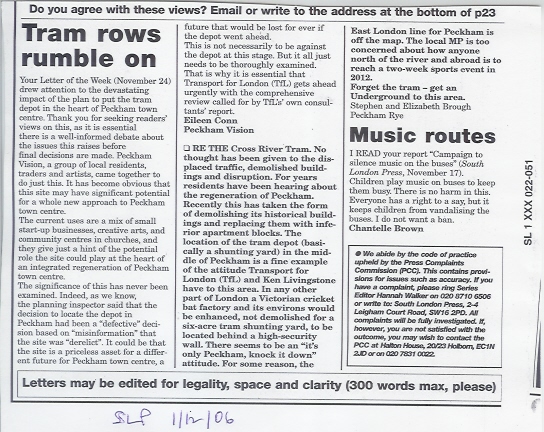 You report (23 November ‘first showing of the tram route plan’) the Peckham Vision view that “local businesses will go to the wall if the depot displaces them”‘. This is very true, and dozens of artists and several churches would go with them.

But in addition to that, there is yet another very important issue. This site, in the heart of Peckham Town Centre, is of strategic importance to its future. The significance of this has never been examined. Indeed, as we know, the Planning Inspector said that the decision to locate it in Peckham had been a ‘defective’ decision based on ‘misinformation’ that the site was ‘derelict’. The current successful uses just hint at the significant potential of the site to revive Peckham town centre; potential that would be lost for ever if the depot goes ahead. It all just needs to be properly examined, before it is too late. That is why it is essential that TfL gets ahead urgently with the comprehensive review called for by TfL’s own consultants’ report. We are glad to see that Val Shawcross supports the call for that comprehensive review. 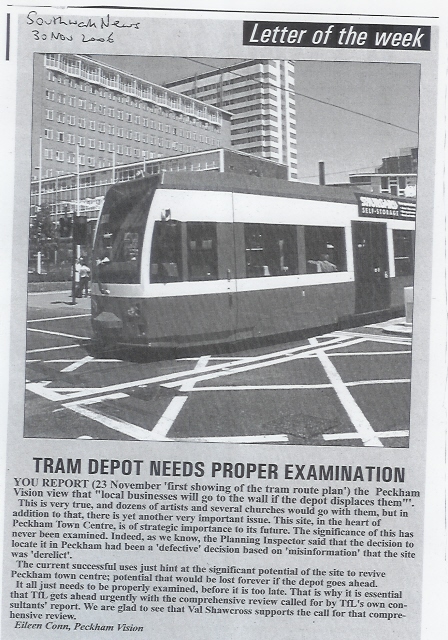 On Monday the 30th October there was standing room only at the Nunhead and Peckham Rye Community Council. Campaigners for effective community participation in the proposed ‘Tram Project’ turned up in large numbers. Led by Peckham Vision they lobbied local Councillors who agreed to the campaigners’ proposals that:
a) site 63P (the proposed depot location in Peckham) is recognised as a site of strategic importance for the future of Peckham town centre
b) a joint working group with neighbouring Peckham Community Council is established to discuss the proposed tram route, tram depot and related developments
c) the Community Council asks the Council’s Executive to get a comprehensive depot review, including a traffic impact assessment on Peckham.

On the agenda for the night was a presentation by Transport for London announcing their consultation on the tram route from 14th November to the 31st January. Peckham Vision must however be commended for turning the focus of the evening’s discussion instead on the tram depot by asking two key questions:

These questions were asked against the background that TfL’s own report recently emphasised the need for “Ensuring that there is a sound, defensible, comprehensive basis to the selection depot sites..” The same report recommended that there should be a “Comprehensive site review, initially property based, exploring potential sites over entire Cross River Tram network area” and that there should be “Further investigation into existing use and users of sites explored..” The challenge now is for the Executive to do the right thing and use Southwark’s position on the Cross River Partnership to press for a proper comprehensive review of depot site options along the proposed tram route.

Leading up to the local elections this year, the main political parties made their positions on the proposed Peckham tram depot clear in the Southwark News of April 27th. A spokeswoman for the LibDem group said they backed the tram “However, our preference is for the depot to be sited in the Kings Cross redevelopment area, as it was originally planned. Ken Livingstone decided not to go ahead with the Kings Cross plan and now tells us that Peckham is the only option. We would urge him to reconsider other options” Councillor Peter John, Leader of the Labour Party said “I would like to see the tram serving Dulwich as well , but I am not advocating a depot in Dulwich – depots don’t have to be at the end of the line. I think it is absolutely crazy building a depot in Peckham”. Labour Transport spokesman Councillor Barrie Hargrove also said “The Labour group fully back the tram…However the case for the Peckham site for the depot has not yet been proven. We need to make sure we look at a range of sites”. Kim Humphries, the Conservative leader echoed this by saying “I hope the planning authorities can come up with a suitable location for the trams that does not blight the area for residents so we will work with local residents to find a mutually agreeable solution. In the recent consultation on the Southwark Unitary development Plan modifications there have been many objections to locating part of the tram depot in Peckham. The question is whether Councillors will ‘walk the talk’ï¿½ and listen to these local views. I just hope so in light of the statements made prior to the May elections.

Peckham Business Park has been asking for a full and public review of all potential depot sites for the Cross River Tram Depot and its impact on Peckham. Without this we could see large areas of Peckham Town Centre knocked down to make way for the Depot. This does not need to be in Peckham Town centre for the tram to be feasible. In Croydon the depot is located outside the town centre. Before the tram is given the official go ahead a full pubic review must take place before regeneration in Peckham is stunted.

Thank you for drawing attention to the proposal to locate the Cross River Tram Depot in the heart of Peckham town centre (SLP 30 June). The Planning Inspector rejected the original proposal to locate the whole of the depot in Peckham because of the potentially destructive effects on the town centre and on jobs, businesses, churches and homes. He said that the choice of Peckham in the first place had been defective as it was based on the Peckham site being near derelict. He reported that this was ï¿½simply not trueï¿½.

The problem is that any so called Split-Site Depot in Peckham may in practice be the main (if not the only) Depot and could be almost as huge as the original proposal. This might have as many adverse effects as the original proposal rejected by the Planning Inspector. The key point is that no-one knows what the plans might be. The Split-Site Depot is in fact a new policy at the last minute in the Unitary Development Plan process. There is, for example, no information about its size, how many jobs, homes, and other activities would be displaced, where the trams and heavy engineering workshops would be in relation to neighbouring homes; and there has been no consultation about it at all.

It is urgent that TfL release this information. It is urgent that they get on with the review of the site options for the Split-Site Depot and get Peckham properly compared and evaluated alongside all the other options for the first time. The issue is the lack of transparency, and the rush to premature decisions based on defective information. Peckham Vision was formed to campaign precisely on this point (not as a preservation group). Information needs to be publicly available now about these plans so we can all have an informed discussion about the future of Peckham Town Centre. Then we can have sound decisions on where the Tram Depot should be located.