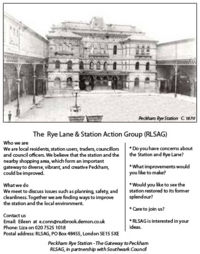 This was the Group's 5th anniversary. It was very well attended with over 60 present. The meeting reviewed the work on improving the interior and exterior of the station, and the plans for integrated developments on the east and west side of central Rye Lane. The meeting heard that English Heritage had delivered their detailed report on the historic buildings in the town centre supporting the case for the Conservation Area; work was progressing steadily through the Peckham Society and RLSAG with the support of the Council on rehabilitating the station Old Billiard Hall; ideas for using the space were being developed, including creating a public restaurant and café there; and the rail industry now accepted that making the station fully accessible was a priority and plans were now being developed by Southern Rail. There was little progress though on the ambitious plans for the station square and rear market courtyard. These depended on a positive change in the expectations of the property owners and developers in central Rye Lane showing confidence in the area by investment. The huge success in 2009 of Frank’s Café and the Art Gallery in the multi storey car park showed some of the as-yet untapped potential. The presentations stimulated animated discussion and a strong demand for opportunities for continued dialogue leading to deeper analysis and effective actions. [This gave rise to a meeting six weeks later, from which emerged the Peckham Town Centre Forum