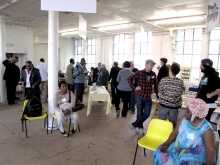 Development Committee meetings are usually held monthly. This is a working committee developing the RLTA organisation, constitution and membership arrangements, to put to the larger traders membership for discussion and agreement. The Committee aimed to arrange two main meetings a year for all traders, one dealing with formal traders business and one social event where traders can meet and get to know each other better. Through pressure of business, it was not possible in 2014 to arrange the all member meetings. Progress has however been made in the projects about traders training and more recently how to improve the management of trade waste. The next RLTA meeting will be a social networking event, on Wednesday 4th November 2015, for businesses and organisations operating in the town centre. Leaflet PDF here.

This is not working well. Traders are encouraged to take photos of any problems, including unauthorised dumping of waste, and send to the council. This needs further investigation. The RLTA has joined in a 6 month project led by Copeland Park and Peckham Vision funded by a small grant of £8,000 from the Council's High St Challenge fund for a joint initiative to review waste management, collection, disposal and recycling.