It was agreed that membership will be open to all traders in or near Rye Lane, and there will be a small subscription when the Association is set up. To join the current provisional members list please print and complete a members form and return it to: RLTA SUGGESTION BOX, KHAN'S BARGAIN LTD, 135 RYE LANE, SE15 4ST or email it to: ryelanetraders @ gmail.com

Development Committee meetings are usually held monthly. Minutes of the January 2014 meeting attached. This is a working committee developing the RLTA organisation, constitution and membership arrangements, to put to the larger traders membership for discussion and agreement. The Committee aimed to arrange three meetings a year for traders, two main meetings (one in spring the other in autumn) dealing with formal traders business and one social event where traders can meet and get to know each other better. All local traders would be welcome to attend these meetings. Through pressure of business, this has not proved possible in 2014. 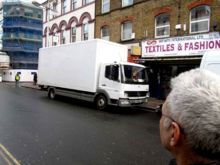 The traders’ loading arrangements are not clearly marked and signposted, and there are no satisfactory arrangements for customers’ loading. The photograph shows a typical scene of a lorry unloading. Sometimes parked for hours, they completely block the view of Rye Lane shops. In this instance passing customers cannot see Kashmir Halal Butchers located at number 153.

This is not working well. Traders are being encouraged to take photos of any problems, including unauthorised dumping of waste, and send to the council. This needs further investigation. Proposals are being developed for developing a joint traders' initiative to review trade waste management, collection and disposal.

[Peckham Vision developed a proposal with the RL:TA and Pecan [LINK] for tailor made training for small traders in Rye Lane to be piloted. Total funding of £7,500 was received from the Council's Cleaner Greener Safer Scheme, and from the High Street Challenge. The first training is now being carried out by Pecan in September and October 2014. This will be evaluated in the early New Year 2015, and understanding of further training needs and methods developed to discuss with traders.

The Traders’ Association agreed in early 2013 with the Council a new scheme to give local young people paid work experience in Rye Lane shops. Six businesses agreed to offer one or two work places for 3-4 months. The Council would manage the recruitment and placement of the young people, working with the potential employers. Each young person would have a mentor to support them, and there would be very close liaison with the employer. The scheme is a real opportunity for local young people and for local businesses at minimal cost, and it would improve relationships and links at a community level. The Traders’ Association is encouraging other traders to take an interest in how this works so they can join the scheme. This scheme has not been developed because the Council has not continued its support.

Over the summer of 2013, the Rye Lane Traders' Association joined forces with Peckham Vision to petition Southwark Council and Network Rail to provide public toilets as part of the work to improve the areas around historic Peckham Rye station. The petition was supported by a number of local businesses and raised over 4,270 signatures. It was finally presented to the Peckham & Nunhead Community Council on Monday 30th September 2013, where local ward councillors unanimously agreed with the joint deputation's request. See Rye Lane public toilets campaign. Public toilets are firmly on the agenda as an issue to be solved for the new PeckhamCoDesign process starting in August 2014.]