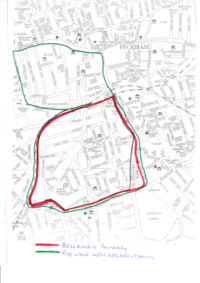 Neighbourhood boundary map. This is just a demonstration and not the fnal map which will show boundaries of the Holly Gv Conservation Area & the Bellenden Renewal Scheme. Being constructed

Welcome to part of the Bellenden Residents’ Group (BRG) website, which is under construction. The BRG is a community group run by local residents. We aim to develop a network of people in the neighbourhood who can communicate easily on matters of mutual local interest. The area covered is the Rye Lane West neighbourhood. This is the SE15 area west of Rye Lane, south of Peckham High Street and Peckham Road, and runs up to the SE5 and SE22 borders. See the map for the streets covered.

These pages are hosted temporarily on the Peckham Vision website They introduce the idea of neighbourhood planning to run alongside the development of the statutory PNAAP (Peckham & Nunhead Area Action Plan). It is a participative process that the BRG is initiating to enable local residents to create and articulate their own ideas about the neighbourhood, in a neighbourhood profile, and make them accessible to others including the Council and developers. See how you can contribute for some first action steps.

What is the character of Rye Lane West?

Rye Lane West is the area that adjoins the borders with Camberwell, and includes the Holly Grove Conservation Area and the Bellenden Renewal area which overlap and cover together most of the area. It is predominantly Victorian terraces, with newer developments filling in the war time bomb damage. It contains a wide variety of houses, architectural styles and streetscapes. In addition, with its emphasis on gardens, open space, local shops and in some parts lack of through traffic, it also has sufficient common features that make it feel like a well-defined enclave set between Peckham, Camberwell and East Dulwich. It is a residential neighbourhood squashed right up against the western edge of Peckham town centre which has a very different kind of character. The neighbourhood is also on the path of the large volume of commuter traffic in the rush hours, sweeping into central London in the morning, and out again in the afternoon/evening, bypassing the town centre. Several streets are dominated by that traffic in the rush hours, while other streets are not affected at all.

Have you been affected by planning applications and enforcements? Do you want to help create a planning and development profile to safeguard and improve your neighbourhood?

Like all areas over the past few years, Rye Lane West has been subject to planning applications that are often felt to be detrimental to the character of the area. These have resulted in many objections and enforcement issues and much time, effort and upset in dealing with them. Changes are inevitable in many ways and it would be useful to understand the pressures for change, but wouldn’t it be much better if developers and house owners knew in advance what we feel would be acceptable? At the same time shouldn’t we get involved in understanding the positive aspects of the area so we can help to identify development opportunities that would enhance its setting?

What is the Peckham & Nunhead Area Action Plan (PNAAP) and how will it relate to us?

This is Southwark Council’s long-term plan, which looks into the future and is intended to result in realistic plans for implementation. It takes into account a whole range of topics from traffic and transport to shopping, business and community facilities, public spaces, new design and especially environmentally sustainable buildings. Although its main focus is Peckham Town Centre it will have an impact on the Rye Lane West Area. We feel that the 'neighbourhood profile', we have been thinking of developing for some time, fits well with the forthcoming discussions about the Peckham & Nunhead Area Action Plan (PNAAP).

The neighbourhood profile will not have any statutory involvement with the planning process but The Lane Ward Councillors support the idea, and the Council Planners are willing to work with us to see how it fits. It is intended that such a neighbourhood profile could be lodged with the Planning Department and given to any developers or others enquiring about development or planning issues in the relevant neighbourhood. It is also going to help clarify a number of issues about the neighbourhood which will inform other actions we might take.

How you can contribute to the Neighbourhood Profile

In the first place we would like to capture what we like about the area and what we would like to see improved, especially its physical aspects. We could well move on to consider other issues facing the neighbourhood.

During 2009 we will be drafting the Neighbourhood Profile from contributions made by local residents. You can contribute:

To add your photo or video with your comment, you will need to upload it to Flickr and add it to the Bellenden Group. You will need to create a free account and login. Then join our group to start adding photos to it by clicking on Add your photo on the groups page. Please tag you photo/video with the road it was taken on.

If you are unsure about adding to Flickr you can email us the photo to BRG@bellenden.net.

We had a first meeting – on 9th December 2008 – of residents interested in contributing. The Lane ward Councillor Gordon Nardell, was present at the meeting along with Michael Carnuccio, the Council planner responsible for planning policy in Peckham. They will both continue to participate. At the meeting we looked at how we might identify and describe what we think is best about our neighbourhood and how to improve the rest. We also had a first look at how the PNAAP might relate to planning issues in our neighbourhood. See the notes of the meeting.