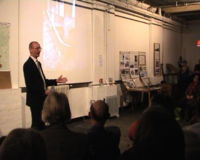 The meeting started with an illustrated presentation from Benedict O'Looney, from the Peckham Society & Peckham Vision, of the history of Peckham town centre,and the community's initiatives and work to restore the historic buildings. This was all enthusiastically received. The meeting then heard from representatives of the railway industry and of Southwark Council - Cllr Fiona Colley Cabinet Member for Regeneration, and Simon Bevan Head of Planning & Transport. The picture, by Southwark TV, shows Tom Higginison, Head of Network Rail's national Town Planning Department, addressing the meeting. He said that his commitment to Network Rail's role in revitalising Peckham town centre was shown by him choosing to come to the Peckham Town Centre Forum meeting instead of a prestigous opening of new developments at Kings Cross.
He read out a message to Peckham Vision and to the meeting from Andy Savage, Director of the Railway Heritage Trust:
My apologies for not being able to attend. I'm delighted with the work you've done on the station to date, and that we've been able to help with the re-fenestration project. We look forward to restoring and extending Driver's staircase with you in the next year or so, and to eventually contributing to a full restoration of the Old Waiting Room, formerly the Billiard Hall, as a community facility.