From 1977 to 1982 the Peckham Action Group (PAG) led a campaign against the demolition of the north side of historic Peckham High Street for a new town hall and 4 lane road. This page is collecting digital and other references to the campaign and its history, and comments on its relevance to the current work of Peckham Vision. 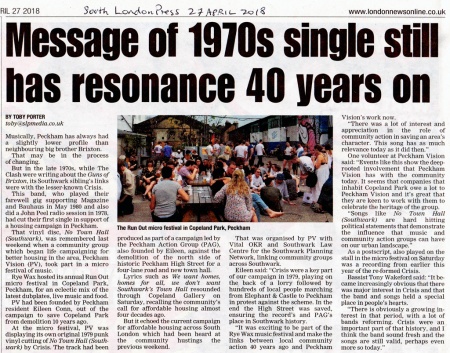 In 2018, Rye Wax hosted their annual Run Out micro festival in Copeland Park for the latest dubplates, live music, food and the eclectic atmosphere that the event attracts. However amongst the music stalls, commanding a great sense of respect, was the Peckham Vision stand. This community group, founded by Peckham resident Eileen Conn, was born from the campaign that saved Copeland Park from demolition 10 years ago. Promoting the slogan ‘Things Don’t Just Happen’, the group was exhibiting the original 1979 punk vinyl ‘No Town Hall (southwark)' by Crisis, and the 2018 launch of a live recording of one of their recent concerts on CD. The original was produced as part of a campaign led by the Peckham Action Group (PAG), also founded by Eileen, against the demolition of the north side of historic Peckham High Street for a 4-lane road and new town hall.

Crisis were a key part of this campaign, playing on the back of a lorry followed by hundreds of local people marching from Elephant & Castle to Peckham in protest against the scheme. In the end the High Street was saved, embedding the record and PAG in Southwark history. Lyrics such as “We want homes, homes for all, we don’t want Southwark’s Town Hall” resounded through Copeland Gallery, not only vocalising the community’s call for affordable housing over three decades ago, but reinforcing the public cry for ‘actually affordable housing’ at the Community Hustings the previous weekend. That was organised by Peckham Vision with Vital OKR and Southwark Law Centre for the Southwark Planning Network, linking community groups across Southwark.

Eileen said: “It was exciting to be part of the Rye Wax music festival and make the links between local community action 40 years ago and Peckham Vision's work now. There was a lot of interest and appreciation in the role of community action in saving an area's character. This song has as much relevance today as it did then.”

No town hall (southwark) was produced by Peckham Action Group (PAG) on its own specially created label Action Group Records. Local resident Peter Bibby part of the PAG campaign group took the lead in producing the record. This was to give expression and publicity to the campaign to prevent the demolition of half of the High Street. The band played on the back of a lorry on a march from Elephant & Castle to Peckham. Another notable feature of the campaign was that it was supported for four years by local groups from the far left to the Conservative Party. Bringing this coalition together and keeping it together was the work of Eileen Conn local resident and founder of Peckham Vision nearly 40 years later campaigning to save the centre of Rye Lane from demolition.

Your first single, ‘No Town Hall’, was released in 1978 by Peckham Action Group, which looking back now, sounds like something from an episode of ‘Only Fools & Horse’. But it was actually released to highlight their campaign against the plan to build a new Town Hall in Southwark. How did you get involved with that ?

What kind of reaction did the single get ?

The single also brought you to the attention of John Peel…

Interview from the vinyl factory

"... Despite the disparate origins and diverse motives of those involved, there are structures specific to the area that act as a form of social glue and over the course of these interviews, one name cropped up more than any other. As the community activist and campaigner behind Peckham Vision which, among countless projects, is active in protecting the area’s artistic communities, Eileen Conn has left a particularly big impression on both Gilla and Bradley. “When you couple grassroots support like that with the huge numbers of arts students in the area it can really help to sustain a creative environment,” explains Gilla.
Picking up the story Bradley describes the longevity of her impact in binding the area to its musicians. “In the ’70s, Eileen was involved in a protest as part of the Peckham Action Group, to resist the rebuilding of Southwark town hall,” explains Bradley. “In fact, as part of the protest, a local punk band made this amazing 7” record called ‘No Town Hall’. I got hold of a copy. Interesting fact: the address on the label is Nutbrook Street, still Eileen’s house, and it’s one road over from mine, which is the address on the Rhythm Section International label.”
It’s a sensitivity to details like this that make Peckham feel like the exception rather than the norm. Somewhere along the line it has retained a semblance of the diverse and conscientious communities that are being bulldozed out of other areas of London and the personalities that are brought to the fore in a culture of physical record trading is about as good an expression of this as anything else.

Whitten Timber] is located at Eagle Wharf at the head of the Peckham branch of the Grand Surrey Canal. Not surprisingly the area is known as Canal Head. The company is a longstanding business there, but announced its closure in July 2019. In the 1970s it was right in the way of the plans for the proposed new town hall and 4 lane road. Robert Whitten one of the directors attended the first public meeting that Eileen Conn arranged in 1977 to alert local people to the plans and see what views there were about action. Robert and Eileen worked closely together on the campaign for the next 4 years until the plan was defeated. As a result the directors of the family company presented Eileen and Peckham Action Group with an original Whitten painting and an inscribed leaded glass planter. On the occasion of the 100th anniversary of the company in 2014, Southwark News published a letter from Eileen recording this for posterity. See the image below and click here for the pdf.