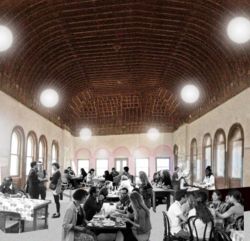 extract from minutes: item 2.2 Use of the Old Billiard Hall/former Waiting Room
Lettice Drake and Paloma Gormley presented some ideas for using this historic space. They were responsible for the initiation, design and building of Frank’s Café, the temporary café on the roof Rye Lane’s multi story car park from July to September 2009. They worked with Southwark Council and Hannah Barry with a budget of only £4,500. Its success was overwhelming - attracting people from across London to visit it. The success of Frank’s Café highlights the role creative thinking can play in Peckham’s future. Their proposals included the following: