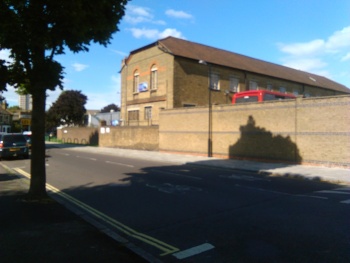 The ‘Old Mill Building’ was built between 1870 and 1890 as a ‘British wine manufactory’. It is a fine example of an attractive sturdy Victorian brick building, close by the amazing Victorian brick arch of the Consort Road rail bridge and the Bussey Building across the road in Copeland Park. It continued in the wine manufacturing business until the 1950s, passing into Council ownership by the 1960s (in the Peckham Society News’ Winter 2017.) It became derelict and was threatened with redevelopment by the Council in 2005. Community Outreach Ministries have restored the building since 2008 for use as their church and also for community events and facilities.


Please email info@peckhamvision.org , with your name and postcode, to give your views on the points below to support the community case that this building should be preserved for uses in the future and as part of the local heritage:

The Old Mill Building 72 Copeland Park, SE15, the home of Communities Outreach Ministries, a Pentecostal church will be open between 12pm – 1pm on Sunday 9th September for the start of the Southwark Inter Faith walk. There will be a talk about the Pentecostal church Communities Outreach Ministries and their work to restore the historic building, and then the walk will visit other faith places in Peckham and on to Bermondsey and Burgess Park. To book a place register on eventbrite here. Click here to print a copy of the poster with the map of the walk.