During the preparation for the Public Hearings July 2013, a number of local residents and organisations worked together, and from this the Peckham Planning Network (PPN) evolved. As a result the PPN submitted a response to the consultation, in addition to those from other local organisations and individuals. Responses to the consultation had to be submitted by the deadline of 5pm 6th January 2014. They will be posted on the Council’s website in due course. In the meantime here are some of them. 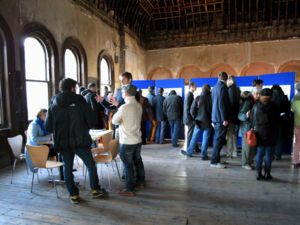 consultation in the Old Waiting Room

At the Peckham Community Council meeting on 25th November, architects Weston Williamson, commissioned by Network Rail, explained that they would be developing the planning application for the redevelopment of the station surrounds to submit in February 2014, and that they would hold a consultation event on 30 November 2013 with a deadline for comments by 6 December. There would be a further consultation on the planning application proposals in January 2014. There were a number of comments from residents and businesses that the consultation period was unacceptably short at just a week. In addition, the Peckham Planning Network, made up of local people working on planning issues in Peckham, submitted and read out a statement to the Community Council of the poor community engagement process which had wasted time in the lead up to this point as the Council and Network Rail, for more than a year, had refused to engage in any public discussions about the design concept for the proposal.

The exterior of the shops number 12 – 16 Blenheim Grove (between the station forecourt entrance and the first railway arches) is being renovated - repaired and painted – the first for a long time. The owners, a small property company called Roundmen Limited, have these premises on a long lease from Network Rail. This work has been planned for some years. They lease the shop on the corner of the station forecourt entrance, number 12, to the owner of the hairdressers who were there till last year. Latest information is that he is refitting it for another hairdressers. The shop next door to that in the arch leading to the station entrance, with a double shuttered front, is leased by Network Rail to someone else and will in a few weeks open as a delicatessen with refreshments.

The latest news is summarised in Peckham Vision's community information news sheet August 2013. This covers the work on the original staircase, the Old Waiting Room, the station square and rear (the Council's Gateway project). 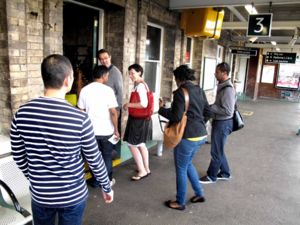