The Hannah Barry Gallery first found a home in the emerging Copeland Cultural Quarter in central Peckham in November 2007. The iconic historic Bussey Building, home to almost a hundred artists and small businesses, hosted a seated dinner for 115 guests to celebrate a year of exhibitions at 78 Lyndhurst Way and to thank the many people who had helped and encouraged the artists in their work. Inspired by the unusual conditions at 78 Lyndhurst Way, with its ten rooms and garden, the programme of monthly exhibitions at the house had exhibited monograph bodies of work within a group show. The subject of each show was chosen to encourage progress and experimentation to help young artists develop their ideas in reference to our time. The Hannah Barry Gallery was founded to continue and progress this kind of work. The first exhibition held in the Copeland Cultural Quarter (CCQ) was in Feburary 2008, in the Bussey building. The Gallery moved to its current permanent space in a warehouse next to the Bussey building within the CCQ after that. 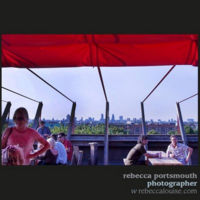