This page is under construction

The Station Gateway site is a complex one with commercial buildings nestled amongst railway buildings, viaducts and arches. The site is divided into properties with addresses on Rye Lane, Holly Grove, Blenheim Grove, Station Way, Dovedale Court, and Blenheim Court. So we created a site map showing exactly where these places are and how they related to the plans for total clearance that we were beginning to hear about. This aid to discussion proved invaluable as during 2013 we took two deputations to the Cabinet, attended a Scrutiny Committee, and took part in many community fairs, events and meetings, and discussion about the issues raised by the plans. Then Network Rail published their proposals to clear the site and redevelop it completely. To be able to have clear discussions, local people needed to have a model of the existing buildings and their layout on the site and also the areas around the site. We had suggested to the Council during the consultations last winter that a model would be very useful for this purpose. But the Council turned down the idea as too expensive.

So Peckham Vision decided to ask local people on our networks if they would be interested in making a model with us for use in the planning discussions. Many people responded enthusiastically, and over 30 are now taking part in our model making group under the expert guidance of local architects Benedict O’Looney and Clyde Watson from Peckham Vision. Four local organisations supporting the project are the Peckham Society, Whitten Timber and Complete Fabrication, and Khan's Bargain Ltd. The model is at a scale of 1:100 and has slowly taken shape building by building. It was first displayed in public on 23rd July 2014 in the CLF Art Café in the Bussey Building. The group has decided to continue in existence and to recruit more volunteers. There is still more work to complete the existing model, and to contribute to the co-design process for the station site. There are also further development sites in the town centre that can be modelled.


There is still plenty of room for more volunteers. Model making experience is not essential. If you want to take part, email info@peckhamvision.org. 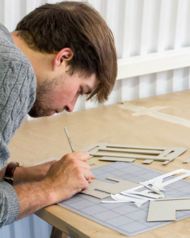 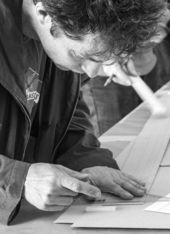