Rooftop Film Club on the roof of the Bussey Building.

The Bussey Building is the flagship building to the overall Copeland Park site, an industrial estate transformed into a creative community led by small businesses. The Bussey Building is a huge 19th century factory building which has been used for creative endeavours since the late 1990s when the top floors were used for art studios. In 2007, the CLF Art Cafe moved into the Bussey Building and has grown in popularity since to become one of South East London's most loved late night venues. The CLF Art Cafe also uses its space for various other entertainment purposes including theatre, music, markets and workshops. 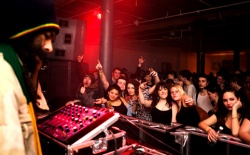 Currently all units inside the Bussey Building are occupied. There are over 60 small studio spaces occupied by businesses and freelancers basing themselves at Copeland Park during the working week. The uses of these studios vary from traditional painters and carpenters to textiles and ceramics to desk based studios for architecture, graphic design and photography. The site still retains its cultural diversity accommodating several West African Churches and a Mosque in the Bussey Building and the greater Copeland Park site, as well as African food cuisine and tailors. One of Bussey Building's most recent changes is the relocation of the Peckham Vision studio to a new space to host community meetings, discussions and workshops.

A sketch of a possible addition to the Bussey Building on site 63P.

Peckham Vision always argued that this was a strategic site in the heart of the town centre, and could have a different future. The mix of historic buildings and other spaces provide significant potential for innovative development for new modern uses providing vibrant life to the town centre. The Bussey Building is probably the last really big early 20th century industrial building in Peckham of which there were once quite a few. It was probably used for wartime production during the first and presumably the second world wars. The basement was used as an air raid shelter during the Second World War.