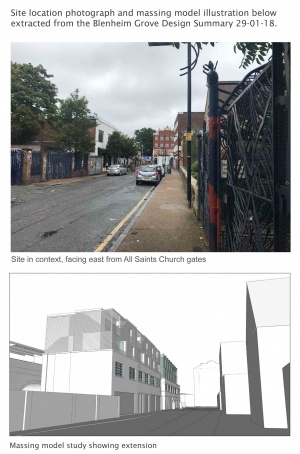 February 2018: A plan to double the height of the two storey art deco building at 12-16 Blenheim Grove is being made. The Developer is seeking comments by 15th February 2018. Comments should be sent to them with the subject title 12-16 Blenheim Grove/Pre-Submission Consultation at admin@interpolitan.com. They will summarise them and put to the Council when they apply for planning permission very soon. This plan can't 'preserve and enhance' the nature and character of the town centre Conservation Area as it would harm the low rise nature of the Art Deco cluster around the station, it would diminish the sight of the sky when walking along the pavement, create another narrow canyon like street, and introduce potential for more conflict between new residents and town centre uses in that vicinity: