The funds have been brought together from Railway Heritage Trust, Network Rail and from the Council Cleaner Greener Safer scheme to restore and extend the staircase. We hope to get access again this summer to do a series of historical events to celebrate the railways in Peckham. More news later.

The delays caused by excluding the public from discussion, during 2012-2013 about the way to design the improvements around the station, have stalled the progress on the use of the Old Waiting Room and the restoration of the staircase. In the meantime, working together, local Benedict O'Looney Architects have volunteered their expertise to line up most of the funds to complete the staircase and the necessary agreements for alterations, and Peckham Vision have developed a business plan for a community enterprise to run the space as a multi purpose venue hire. This will be put to Network Rail soon.

Final restoration of staircase maybe ready to start in 2014

Staircase restoration: most of the planning and permission work to complete the restoration and extend the staircase has now been done. The next stage is to raise another approx £50,000 to pay for the restoration. A fund raising plan is being developed, and discussions with Network Rail in process. If you can help please email info@peckhamvision.org

In November 2012 there were the first glimpses of the original Victorian stone and cast iron staircase from the forecourt of Peckham Rye station, for the first time for over five decades. The bricks had just been removed and replicas of original window frames installed.

now in January 2013 that initial work is completed and the staircase is fully visible, and illuminated in the evenings, creating a magical spectacle at the station. This is another step along the way to full restoration of the front of the station. 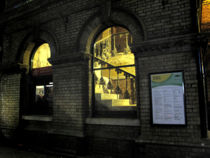 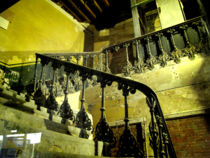 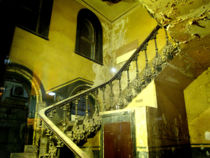 The station architect Charles Henry Driver was an energetic proponent of cast iron which is used in this staircase. In the station’s alterations in the 1930s and 1960s most of the station’s other distinctive cast-iron work was removed. Examples of this can still be seen at the Denmark Hill and Battersea Park stations. The original iron stair remains in Peckham Rye station, and the work initiated by local groups will restore this, and extend it to the restored Old Waiting Room. 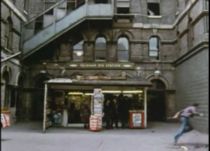 This striking stone and cast iron staircase originally led to a gallery at second floor level in the ticket hall. Later, it was extended out onto the front of the station building and through a window on the top floor into what became, until the 1960s, the public Billiard Hall (the picture shows this extended staircase in a still from this 1979 episode 1979 TV programme The Sweeney; this extension was removed in the 1980s). Until about 1900 the room had been the original Waiting Room, and since 1962 was bricked up. Current work is restoring the staircase and extending it up inside the stairwell one flight, to bring it into the Old Waiting Room for the first time from the forecourt. It is hoped to raise the funding to complete this by the end of 2013. This will give public access to the space above the ticket hall without going through the station.

The work is being carried out by Benedict O’Looney Architects who have done all the restoration work so far, with the generous support of Southwark Council’s Cleaner-Greener-Safer Fund, Network Rail, the Railway Heritage Trust, and the Peckham Society. More work and more substantial funds are needed to restore the Old Waiting Room fully, and plans are being developed by Peckham Vision for this, and for the use of the room as a community managed town centre space for a variety of uses and available for hire.

This will also need a lift installed in the station to carry goods and materials to the Old Waiting Room and provide disabled access. Network Rail is preparing plans for lifts to all platforms to put to the Department for Transport for funding. Peckham Vision has made proposals for these plans to include lift access for the Old Waiting Room. Without it will not be useable as it will not meet the statutory requirements for disabled access.

Onwards with revitalising the station March 2010