These are documents produced by Peckham Vision to be shown to public bodies and the council about Site 71P and other issues regarding Peckham. 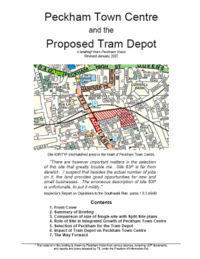 The front page of the Councillor's Briefing Pack.

This briefing pack is designed to outline the issues raised by the proposal to locate the Cross River Tram Depot on Site 63P/71P in the heart of Peckham Town Centre, and to indicate the way forward.

It was originally made in October 2006 and updated in January 2007.

This document includes comments from Peckham Vision about the PAAP Future Peckham in April 2008.