Architects who turn derelict sites into places worth living in are modern-day alchemists, says Rory Olcayto

Last weekend, taking advantage of the bright, crisp December weather, I wandered around my south London neighbourhood of Peckham with an architect friend. We were talking about how tough the year had been for the construction industry. â€˜Soul-destroying’, said my friend, as we drifted from bustling Rye Lane into a post-industrial no-man’s-land.

Within minutes however, we caught sight of Walter Menteth Architects’ supported housing scheme on Consort Road, and our gloomy discussion stopped. Given the immediate context – a railway viaduct behind, with arches beneath, bus depot and materials yard opposite and a busy A-road running along its length – its visual purity proved shocking, unexpected and genuinely thrilling.

Let me explain. The project has a bold sculptural form, comprised of three distinct blocks. A six-storey shared ownership scheme links with a terrace and a corner block of rented flats. The elevations are white render, they incorporate glazed winter gardens and magically, at street level, they sparkle. The architect has laid vertical slabs of Tarmac, embedded with glistening aggregate, to break up the elevational strip. Stainless steel panels on the north end, which comes to a point, soar above these slabs. It looks amazing.

The rear elevation is just as good, perhaps better. It deals with an access road (serving the arches) by sectioning off its footprint with a perimeter wall of concrete and gabion cages. It feels – and is – robust. Beyond, an elegant curving glass wall, beautifully modulated with strips of galvanised steel, provides a buffer zone between the flats and railway.

We spent time examining the building, which was completed just over two years ago. It was one of those moments when you feel good about architecture. About how compassion and craft can combine to transform the mundane, make a place out of nothing, and bring light to the darkest of environments.

It reminded me how hard the architectural profession works, throughout the UK, to steadily and incrementally improve our nation’s lot, and continues to do so, even when times are as tough as they have been lately.

All the best for Christmas and the New Year. You deserve it.
rory.olcayto@emap.com How Hannah Barry has managed to take a group of unknown young artists from a Peckham squat to a Venice pavilion in just three years.

It was always likely that British art would recover from its post-YBA slump in a manner as radically refreshing, thrilling, and unforeseen as the arrival of Hirst, Emin, et al. had been at the beginning of the 1990s. But few could have predicted that the revolution would start in Peckham.Change is afoot in this corner of London, specifically behind the anonymous-looking doors of a particular warehouse in an industrial estate. Those doors lead to the Hannah Barry Gallery, one of the most dynamic new art galleries in Britain and home to some of the best young talent in the country.Â Read more

On 26th November the Peckham Multiplex showed a one hour film called â€˜Consume Peckhamâ€™, which consisted of 18 short films, each focusing on a different business based in Peckham town centre. The work of film students from Chelsea, the film wove together a tapestry showing the many sides to Peckhamâ€™s Rye Lane, and beyond. Its aim was to show the link between cultures and commercialism. There was a great turnout – the cinema was full – and a terrific buzz, to see the collection of short student films about some of the businesses in the town centre.

It was a very good show from first year students. And it was recognisably the place we know!Â It showed the people of Peckham in a true light, and that the town centre does have a lot of life in it in its various forms, though with lots of space for improvement. For those there, many really interested in the revitalization of the town centre using all our assets â€“ people, buildings and commerce â€“ it will have stimulated further thoughts on how to do this and about the nature of thecommercial dynamic, and its potential. Click here for more reports. http://www.laurieeggleston.org/2009/11/consume-peckham-culture-commercialism.htmlÂ Â  and hereÂ  http://helengraves.co.uk/2009/11/ozzies-cafe-peckham/

There have been a number of requests for another showing and the producers are looking into that. So if you couldn’t make it there may be another chance. Email info@peckhamvision.org if you want to join the mailing list. The summer with Frankâ€™s CafÃ© & Campari Bar with its fabulous views from central Peckham comes to an end on 26th September 2009. Letâ€™s hope the huge success encourages Frank to start a permanent cafÃ© in Peckham. In the meantime, see these splendid views by Nick WoodfordÂ and a few of the many photos and comments over the summer.

Such is the context for Bold Tendencies III, [see details] the third and doubtless boldest of sculptural exhibitions by the brilliant Hannah Barry Gallery. The ambition, the sheer scope and the obvious media delight for this show have given it a somewhat mythical status. Attendees at the sunny launch have swollen from a probably conservative 700 to 1500 and The View is fast becoming the best in London.
Arriving on foot from the neighbouring Peckham Rye station (ten minutes / Â£2.40 Victoria or London Bridge) the entrance is a ropey elevator that smelled of somebody elseâ€™s urine. â€˜Heavenâ€™ was written on the stainless steel. It was so good I wondered if one of the curators had pissed in the corner themselves. â€¦ the pioneering role that this gallery, just returning from their Peckham pavilion in Venice, is playing in the emergence of Peckham as Londonâ€™s most current art area. read more…

Venice, glorious city of Titian, Casanova and Vivaldi, has welcomed a new artistic powerhouse into the international fold at the Biennale this week. Enter Peckham, downtrodden South London neighbourhood made famous as the setting of Only Fools and Horses. The Peckham Pavilion at the Venice Biennale is a whitewashed studio the size of a small newsagentâ€™s shop. Although it is outside the official competition it is already attracting appreciative visits from some of the art worldâ€™s most influential tastemakers.

â€œIt feels very much like where we are in Peckham,â€ Hannah Barry said yesterday, with a straight face. â€œThe busyness of the place, the selling of food on the streets, the fish â€” these are all big things in Peckham.â€ Ms Barry, 25, founded her eponymous London gallery last year with Sven MÃ¼nder, 30, a Bavarian who had just completed a degree in cultural history.Â Â The gallery is now on the radar of some of the most important people in the art world. This despite Peckhamâ€™s undeniable, and they believe undeserved, reputation for crime and urban decay. “Peckhamâ€™s got a really bad name but we are really grateful to the area for allowing us to do what we do. More people should know that itâ€™s a place where things are really possible.â€Â Ms Barry said. Because of its cheap rents and proximity to Camberwell and Goldsmiths schools of art, Peckham is home to hundreds of young artists, giving Ms Barry and Mr MÃ¼nderâ€™s gallery and their Venice pavilion a strong local identity.
Read more 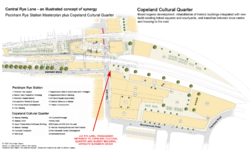 “NEW DESIGNS for Peckham Rye train station have been unveiled as the council presses ahead with plans to regenerate the area, despite the body blow that no tram will come there. A summit of key figures will sit down tomorrow and thrash out how the ambitious policy will be funded, with a discussion on how pressure can be applied to Network Rail to open up its purse strings.

If the plans were approved, areas at the front and back of Peckham Rye station will be transformed into a piazza leading onto Rye Lane, and a market area at the rear using the existing arches as access points. The meeting, led by Peckham Community Council, aims to change the instant impression people get when they walk out of the station. It will also attempt to make the station the focal point of the area.

The idea has been mooted for sometime but a council spokesman said this meeting and the plans were hoped to be a catalyst for the future. ” Read more …

The Hannah Barry Gallery at the Bussey Building.

On the evening of Thursday 21st February the first floor of the Bussey Building was packed with people celebrating the opening of MANY WORLDS by Bobby Dowler, the second exhibition of the year from the Hannah Barry Gallery (see photos).

The exhibition is on the first floor at The Bussey Building, 133 Rye Lane, Peckham SE15. This Victorian cricket bat factory is just across the road from Peckham Rye station.

The exhibition will run until Friday 29th February, open 3 â€“ 8 pm daily and 12 â€“ 5 pm at the weekend, accompanied by a sequence of timed events: click for details.

Alice (www.alicewhiteart.com) practices as a painter from a studio in Peckham, located on the top floor of the historic Bussey Building, part of the site threatened by the proposed tram depot on the large industrial estate behind Rye Lane. Her studio is one of many on the site, now home to a thriving creative community, with great potential. Dulwich-On-View â€œrecognises and celebrates the eclectic nature of the life of Dulwich and the surrounding area, the breadth of people and livelihoods, the rude health of the Arts, and the buoyant sense of community, and subverts the tired old caricatures lazily ascribed to our South London home.â€