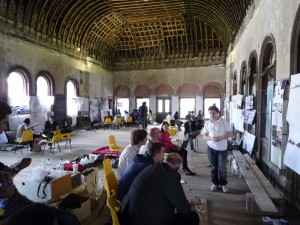 For the last two years the schoolâ€™s spring term design studio has focussed on Peckhamâ€™s town centre, in particular the open spaces in front of and behind the station. Many of the students come from south London.

The event was held at the enormous former waiting room at the Peckham Rye Station, which has been unused for more than forty years. This remarkable, grand, space is one of the highlights of Peckhamâ€™s architecture and is being restored by the local architect Benedict Oâ€™Looney, with the help of Southwark Council. Benedict is a conservationist active with the Peckham Society and a design and history teacher at the Canterbury School of Architecture.

Southwark Councilâ€™s community-oriented â€˜Cleaner Greener and Saferâ€™ fund has put forward several grants to unblock the windows and restore the floor to the former waiting room, which was used as a billiard hall from the 1890s to 1960. This room was bricked up and closed off to public use when the stationâ€™s southern platforms were rearranged in 1962. The Peckham Rye Station was designed by the eminent Victorian architect Charles Henry Driver in 1865, and this large and lofty waiting room was the buildingâ€™s principal interior space. The Peckham Society has been campaigning forthe restoration of this prominent local landmark and was successful in getting the station listed grade 2 in 2008. It is hoped that the former waiting room will one soon find a new life as a community meeting space, gallery or cafe. The large student gathering made clear the spaceâ€™s excellent community potential.